Housing Minister Mark Prisk has announced £40.9 million investment towards affordable housing in the North East, Yorkshire and the Humber that will create new jobs.

According to the Homes and Community Agency (HCA), significant number of the new homes will be completed by the end of March 2015, paving the way for new employment in the trades.

David Curtis, Executive Director for the North East, Yorkshire and The Humber at the HCA, said: “The confirmation of this funding is great news for local residents, as it will ensure that there is a choice of housing for people where they want to live in homes that they can afford, making a real difference to the local community.”

Housing Minister Mark Prisk said: “I am pleased to announce the first wave of allocations through this programme with £220 million Government funding to help deliver over 14,000 new homes.

“Today’s funding allocations will enable organisations across the country to hit the ground running, and play their vital role in getting Britain building and delivering the homes and jobs this country needs.” 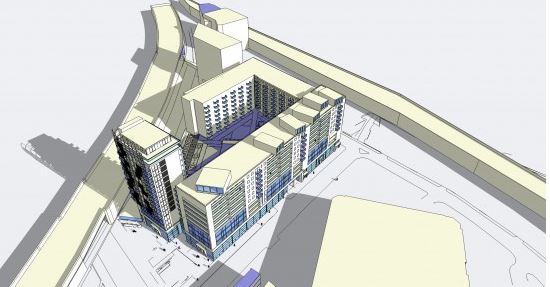 Bouygues UK subsidiary Denne, has been awarded a £57 million contract to develop a major mixed use development scheme in Lewisham, south east London.

The project is located on a former industrial site on Thurston Road and includes more than 400 new homes for people on a range of incomes, and 6,771sq metres of retail space.

The apartments will be in three buildings of six, seven and 15 storeys respectively, sitting on a two-storey landscaped podium structure which incorporates the retail space. The building will be constructed with a concrete frame and includes two levels of resident and shopper car parking.

Sustainability is high on the agenda, with an offsite Combined Heat and Power system providing heating and hot water. Brown roofs will also be a feature of most of the buildings to aid biodiversity. All apartments will meet Code for Sustainable Homes Level 4 and the retail units have a target to achieve BREEAM Excellent.

Paul Abson, Managing Director of Bouygues UK’s Housing Management Unit, said: “We are delighted to have been awarded the contract to deliver this prestigious mixed use project, which enables us to continue our excellent working relationship with L&Q.

“With a strong focus on sustainability, we believe the scheme will transform the existing site and also provide much needed homes for the people of Lewisham.” 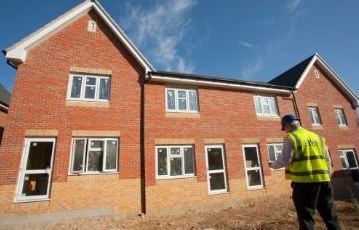 Work on a major regeneration scheme in Darlington has begun to pave the way for the building of new homes, offices and retail space set to create hundreds of new jobs.

The scheme is developed by Darlington Borough Council and the Homes and Communities Agency (HCA) working in partnership with housing and regeneration specialist Keepmoat.

The first phase of construction on the Central Park development in Darlington will see 332 new homes built including 20-homes for affordable rent, a major new park and other community facilities.

The £170 million 30-hectare development is located close to the town centre, off Haughton Road near the main railway station.  The main site entrance is beside Darlington College and Teesside University.

The second phase of the development will also see the creation of hundreds of new jobs for local people, around 300,000 sq ft of prime office and retail floorspace, a hotel as well as a further 180 new homes.

On the South of the site, new office space will be provided in a state of the art business incubation accommodation for new and growing small to medium sized businesses in Darlington, located within the Central Park Enterprise Zone.

The facility, which will provide sufficient space for up to 52 businesses, will be part-funded by the HCA and funding from the European Regional Development Fund (ERDF) Programme. Construction of this flagship building is anticipated to start in Spring 2014.

Structural road works have already commenced, which will see improvements to the main entrance and the creation of a new roundabout next to the college and university buildings. 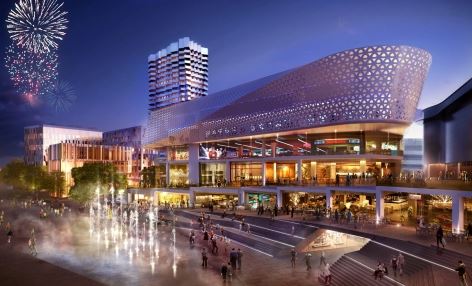 Southampton City Council has given the go-ahead to Hammerson’s £70 million Watermark WestQuay scheme in Southampton city centre that will boost the local economy and new create jobs.

The masterplan will be delivered in two phases with the first phase comprising a landmark cinema building, up to 15 restaurants and additional retail space, alongside newly created public space in front of the city’s historic walls.

The second phase has the potential to include a residential tower, a hotel, flexible office space, restaurants and additional public space.

Guy Wells, Development Manager for Hammerson, said: “The site offers a unique opportunity to transform a redundant brownfield site and will ensure that Southampton continues to provide residents and visitors with a fantastic retail and leisure offer in the city centre.

“We have been extremely encouraged by the support we have received during the planning process and following the determination of the application we will now begin work on our detailed designs for the first phase.”

The centre attracts 17 million consumers a year and recently launched Dining at WestQuay, a £7 million catering extension which attracted new restaurant brands to the centre and Southampton.

ACME designed the masterplan for Watermark WestQuay and Barton Wilmore is providing planning advice on the project.

The Government has announced a new £20 million Green Deal Communities scheme to help local authorities to drive street-by-street delivery of the Green Deal.

Under new proposals from the Department of Energy and Climate Change (DECC), local authorities in England will be able to bid for funding from a £20 million pot to help households benefit from the Green Deal on a street-by-street or area basis.

Local authorities will identify target streets and areas in their regions that could most benefit from the Green Deal, and then offer incentives to households in these areas to encourage them to install energy efficiency home improvements under the Green Deal.

Local authorities will propose incentives as part of their bids for funding, which will be assessed by DECC.

Energy and Climate Change Minister Greg Barker said: “If we are going to deliver the Green Deal at real scale then we need a ‘street-by-street’ vision and a ‘street-by-street’ plan! It starts here! However, local authorities really know their areas best. They know which streets and properties could most benefit from a Green Deal to improve their energy efficiency, and what local people need to provide them with a greater choice.

“The Coalition is committed to helping hard pressed consumers and this £20 million funding will help more families benefit from the Green Deal, making homes warmer and more efficient, and protecting consumers against rising energy bills.”

The Green Deal is an ambitious and long term programme aimed at improving the energy efficiency of the nation’s buildings. It gives homes and businesses the opportunity to pay for energy efficiency home improvements through savings on their fuel bills.

Green Deal Communities will support local authorities, in partnership with local community organisations and businesses, to encourage take up of the Green Deal and other energy efficiency improvements in whole streets and areas throughout the country. Funding will only support those households using Green Deal finance or self-financing to install Green Deal measures.

To allow the development of strong bids local authorities will be able to bid up to 31 December 2013 or until the funds are exhausted.

DECC has already provided £23 million of funding for core cities and local authorities to kick-start the Green Deal, and today a £200 million energy efficiency scheme for homes in the North East – Warm Up North – has been announced by Newcastle City Council.

More than 50,000 households and businesses in the North East are expected to benefit from this investment.

The Mayor of London Boris Johnson has announced a £137 million fund to kick-start delivery of the next phase of affordable homes and jobs in the capital.

The funding is set to deliver over 6,000 affordable homes and secure up to 12,500 jobs in the trades. More than 50 housing providers have been allocated with work expected to start this Mayoral term.

“Over the last five years we have delivered record numbers of affordable homes, bought thousands of empty homes back into use and helped tens of thousands of Londoners on to the property ladder with part-buy, part-rent schemes.”

The Mayor believes that building up this future pipeline of affordable housing is essential for maintaining the capital’s economic competitiveness.

With a rapidly increasing population it is predicted that at least 40,000 additional homes need to be built every year in London by the 2030s. Without these homes Londoners who work in the city will find it increasingly difficult to be able to afford to live here.

The Mayor is calling on the Government to look again at granting the capital a continuous, reliable funding stream for housing enabling him to get the best deal for Londoners, negotiate longer-term agreements with developers, and secure the housing the capital needs to continue to thrive and grow.

Ian Gorst Managing Director of Bellway Thames Gateway commented: “We welcome Boris Johnson’s commitment to increasing the number of homes for people in London. The Governments support for homebuyers such as First Steps and Help to Buy, has kick-started the housing market and is making more homes available to first time buyers and those wanting to take a step up the housing ladder.

“We echo his statement for long-term predictability of funding as this provides more confidence to builders to invest in schemes such as Belvedere Park where we are increasing the pace of development. This new funding will stimulate development and create more employment opportunities while opening the door to many more people wishing to buy a new home.”

Ministers have announced a multi-million pound boost that will see the building of 14,000 new affordable homes and create new jobs in the trades.

Sixty-nine different housing associations and developers will each receive a share of £220 million to deliver thousands of affordable homes across the country.

Work on the new properties will be started by March next year, paving the way for new jobs and employment opportunities in the construction industry.

Housing Minister Mark Prisk said: “Today’s funding allocations will enable organisations across the country to hit the ground running, and play their vital role in getting Britain building and delivering the homes and jobs this country needs.”

The move is part of wider government efforts to get Britain building, which will lead to the fastest annual rate of affordable house building for the next two decades.

The Deputy Prime Minister, Nick Clegg, said: “I am delighted that we are delivering yet another big step in the coalition government’s drive for the fastest rate of affordable housing we’ve seen for 20 years.

“It is vital that we build more affordable homes in Britain. The Affordable Housing Guarantees will help to increase supply, making sure good quality housing is available to hard working families across the country.”

The funding is part of an expanded £450 million Affordable Housing Guarantees which will support up to £3.5 billion in government debt guarantees to deliver thousands of new homes.

Of the almost 14,000 homes this money will help deliver, the majority will be available at an affordable rent with 2,000 of those available to buy through shared ownership.

Housing associations and developers who plan to use the guarantee scheme will now work with the Affordable Housing Finance to finalise the details of the loan funding that will work alongside today’s grant allocations.

Swan PR
Create a free website or blog at WordPress.com.